Our featured match in round 5 of the Men’s Supa Liga saw league leaders West Coast Cobras come up against Andinos FC, who were looking to break into the top 4. The Cobras came into the game full of confidence having remained undefeated in the league and boasting the strongest goal difference in the league, whilst the Andinos were looking to bounce back from their previous week’s defeat. 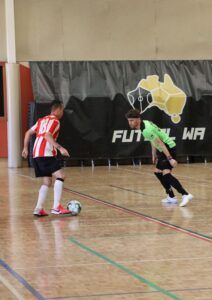 Escobar (Andinos) one on one with Russo (Cobras)

Andinos FC found themselves at a disadvantage even before kick off, with the league’s top scorer Jose Zuniga unavailable to play the match. Cobras started the match strongly, dominating the possession in the early stages of the game, Pizzuto tapping in at the back post to put the Cobras up. Andinos FC were looking to counter-attack a solid Cobras attack and managed to get a few shots away, but a stubborn Tom Robless in the Cobras goal denied them any chances. Yusof and Ozerskis increased the Cobras lead to 3-0 after counter-pressing the Andinos attacks. Gongora managed to pull one back for the Andinos just before the half-time whistle after a quick breakaway was finished well.

Andinos started the second half with defense in mind and managed to keep the score at 3-1 until halfway into the half when Russo finished cleverly into the bottom corner. From then on the Cobras asserted their dominance in the match, controlling the possession and finding the net two more times through Pizzuto and Ross. Escobar scored a consolation goal for the Andinos after playing a fly-keeper, but Yusof closed the game off with his second of the match to end the game 7-2 in the Cobras favour. Halil Russo picked up the match MVP after a solid display of pace, passing and finishing.

Elsewhere in the league, Condors FC defeated Futsal Factory 4-2 to establish themselves in the top 4, Northern Hawks were defeated by Pumas 1-3 in an enthralling encounter that saw the Pumas move up to 2nd and ECU Jets were defeated by Scarborough Sharks 4-1, lifting the Sharks off the bottom of the table.