In huge Futsal news for WA, Zoee Spadano has signed a contract to play futsal in Italy’s top division commending in August with Kick Off C5 Femminile which is based in Milan. Across the years the fixo has been coached by many excellent futsal names in WA and from across the country, Jess Lindquist, Kevin Punselie, Annie Leyland, Conrad McKelvie, Mick Psarris, Corey Smith to name a few. 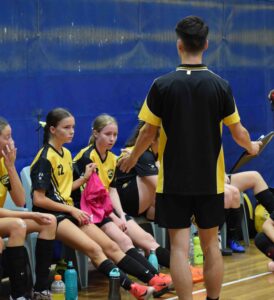 Kevin Punselie delivering a team talk to the 16 Girls team at the 2019 National Futsal Championships.

Her first ever futsal coach, Futsal WA manager, and several time Australian coach Greg Farrell was asked what sets Zoee apart from other players. “Zoee was part of an intake of young players in 2015 into Futsal WA’s development program the Junior Futsal Academy that included current NPLW football players such as Kayla McCulloch and Taneesha Baker, and state futsal players such as Tom Ellis and Mac Meerkotter.” “Since she was 12, Zoee has always had a desire to improve and to be better. You can see it in her eyes in training and in games, elite players are always trying to work out ways to win, and Zoee has had that since she was young. She’s shared the court with ex Matildas, National league and A-League W players in our Supa-Liga competitions and she’s always thinking and taking things in. She will put her hand up to do extra work whenever possible and seeks out opportunities which is part of why she’s now where she is and we couldn’t be prouder of her. In 2018 Alcorcon FSF womens first division coach Adrian Martino Iglesias said that Spadano could go to Spain and play in the first division within 12 months. At the time, the year 11 student wasn’t in a position to act on that situation, and by the time she’d finished school, Covid had reared it’s ugly head. Locally Zoee has been one of the best players in WA since she was 16 and has often been recognised on the national stage through gaining tournament All-Star status alongside players such as Adelaide United’s Miranda Templeman, former Perth Glory player Taneesha Baker and Melbourne City’s Rhianna Pollicina. Zoee will no doubt make a success of this new opportunity, and everyone with the futsal community in WA is behind her.