Phoenix Futsal WA and ECU Jets feature in this weekends match review. Both sides have had a disappointingly mixed season, with injuries and unavailability largely disrupting their consistency. The Jets have been on the up however, and after grinding a few positive results, they are now looking for a finals berth. Phoenix will also be fighting for that 5th position, knowing that anything could happen should they manage to sneak into the finals. ECU Jets finally found their goal scoring form last week after blasting 6 past the Sharks. This is in stark contrast to the Phoenix who have been lacking in goals recently. 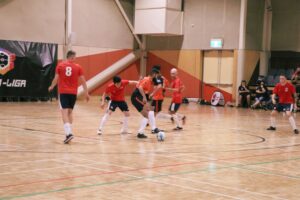 The Phoenix looking to work a shot at goal

The Phoenix started in dominant fashion from the very first whistle, creating a number of chances and forcing Al-Busaidi into making multiple smart saves. The Phoenix knew that it would take something special to get past the Jets stopper, and after 8 minutes, their dominance was finally rewarded. Abdull Farah picked up the ball on the right flank and beat his defender with a neat skill, before driving the ball through the legs of Al-Busaidi to make it 1-0. The story remained the same for the rest of the half, with the Jets resorting to counter-attacking futsal, but unable to get themselves on the score sheet.

With the Jets kicking things off in the second half, they began to look more comfortable on the ball. The change in dynamics for the match forced the Phoenix to sit deeper in their own half. After many attempts at goal, the Jets began to look a frustrated side, not creating enough clear cut chances. Their lack of conversion was eventually punished when Dejkovski got on the end of a quickly taken free-kick, lofting the ball over the on rushing Jets keeper to make it 2-0 for the Phoenix. The goal came as a shock for the Jets, but they were determined to keep themselves in the match and continued to pile on the pressure.

With just seven minutes left, the Jets finally broke through. Adrian Rossi shooting into the top right corner from the opposite flank to make it 2-1. The Jets goal ensured a grandstand finish to the match and the determination on both sides was clearly visible with the foul counts racking up. Unfortunately for the Jets, they were the first to reach 6 fouls and Bakr Zeyad was the one to take the 10m penalty. Zeyad’s initial shot was saved brilliantly by Al-Busaidi, but the Jets keeper couldn’t do anything with the follow up from Zeyad, drilling it through the legs and giving the Phoenix the 3-1 win.

Now to other league news, Andinxs FC were defeated by Northern Hawks SC 0-5. It’s a second heavy defeat in a row for the Andinxs, leaving them with the worst defensive record after 15 rounds. The Hawks win keeps them hot on the heels of league leaders Pumas, who had narrowly defeated Scarborough Sharks 2-1. The Sharks will be feeling sorry for themselves not for the first time this season after initially leading the Pumas. The loss all but confirms their exit in the finals race with three matches remaining. West Coast Cobras defeated Condors FC 3-2 to overtake them into 3rd place.