The featured men’s match of the week is a battle between 3rd and 4th placed Northern Hawks SC vs. Condors FC. The two sides go into the match level on points with the Hawks having the better goal difference after a landslide victory against Andinxs FC in the previous week. Condors also come into the match with good form and confidence, as they managed to defeat top placed Cobras in the previous round. The winner of this one will take either 1st or 2nd on the ladder, depending on other results and with the Cobras having the bye this weekend. Both teams came into the matching missing a few key players. Condors without their influential pivot Felipe Verdugo and the Hawks’ Devon Rindel serving out his 2 match suspension.

Within the first 10 seconds of the match, the Hawks took advantage of a lethargic Condors defence, Meerkotter and Jelenovic working well off each other to give Jelenovic the chance to poke it home and put the Hawks up. From there on it was the Condors that were looking to stamp their authority on the match, largely dominating the possession but lacking in clear cut chances due to a strong Hawks defence. The Hawks could only muster up a few counter attacking chances, but held on to their one goal leading going into half time thanks to some smart saves from Formato in the Hawks net. 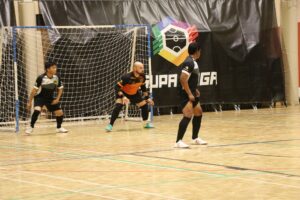 Hawks setting up their defence

The 2nd half started in a similar fashion to the first, with the Hawks trying to catch the Condors on the counter attack. However it was the Condors that scored first in the half with a counter attack of their own. A Hawks free-kick deep in their attacking third turned into a swift Condors breakaway with Silva showing good vision to slip the ball through three back tracking Hawks defenders, finding Pineres who coolly slotted it into the back of the net. Following the equalizing goal, the Hawks started to utilize their pivot Jelenovic with much more efficiency and it didn’t take long for the Hawks to go back in front. Jelenovic finding himself in behind the Condors flanks and laying the ball back for Ropli to tap it in at the back post.

The match then started to become more physical, the Hawks and Condors both showing their desire to win the three points. As the match started to open up and become more physical,  each side trading fouls, it was the Condors that conceded their 6th foul first, resulting in a 10m penalty for the Hawks. Logan Rindel slotted in on the second attempt after his first was retaken, Condors deemed to have encroached. Following that, the Condors were forced to play with a fly-keeper managing to pull a goal back with 30 seconds remaining in the match. With the Condors pushing for a late dramatic equalizer, a costly mistake saw the ball fall to a calm Ziba, who lofted the ball into an empty net to ensure the Hawks victory with a final scoreline of 4-2.

Elsewhere in the Men’s Supa Liga, ECU Jets were unlucky not to come away with their first points of the season after succumbing to the Pumas 4-3. The Pumas were forced to grind out another tight win against a determined Jets side. Futsal Factory overcame a threatening Phoenix Futsal WA side, winning 7-3. Sandy Mckay finding his goal scoring touch, helping the Factory’s cause to score 5 goals. Andinxs FC and the Scarborough Sharks battled it out to share the spoils. The match ended 3-3 after a heated arm wrestle that resulted in a red card for Salas of Andinxs. West Coast Cobras SC had the bye for the weekend, forcing them to concede their top spot to the Pumas, the Hawks close behind with both teams yet to have their bye.