This weekend’s women’s feature match is between the Western Devils FC and West Coast Cobras SC. Both sides come into the match in good form having both won their previous games in emphatic fashion. The Cobras were looking to close the gap between themselves in fourth and the Devils, who were looking to consolidate their first placing. The squads on either side were strong and well balanced with the Cobras welcoming back the influential Kim McCartney to the team after a stint of absence and the Devils boasting the leagues top scorer, Penelope Clayton, who has scored 12 goals thus far this season.

The Devils and the Cobras both looked to have set-up their sides in a similar fashion to start the match off with a typical 3-1 formation. It proved to be a scrappy affair with both sides trying to rush the ball into their respective pivot players. After a scoreless first 6 minutes, the Devils found the breakthrough from a kick-in. Preiato lofted the ball over a Cobras defense and into the feet of Clayton, who brought it down and took it around her defender neatly before firing the ball into the top left corner. The goal settled both sides down as they tried to out possess each other with much more patience and movement on the ball. It wasn’t until the final minute of the half when McCartney intercepted a pass deep in her own half and attacked the Devils defence at speed. McCartney played a nice one-two with Doan who had joined her in the attack, and equalized with a smart finish in the bottom right corner, ending the half at 1-1.

The second half started with a tactical change from the Devils, electing to set up as a 4-0 going forward. The response from the Cobras side was to defend deep in their own half and try to break the Devils on the counter-attack. Again, it took 6 minutes into the half before the Cobras broke through, this time from their own kick-in. Another lobbed pass finding Continibali, who had dragged her defender over to set up a 2v1. Sarah Ranieri receiving the ball at the back-post, squeezed the ball past a diving Musial to make it 2-1 in the Cobras favour. With the Devils now on the back-foot, they were forced to push numbers forward to find an equalizer. And with just a few minutes left in the game, they left themselves short at the back. Bates with a kick in from just inside her own half, with a beautifully weighted long ball into Continibali’s path, leaving her with the easy job of passing it around the helpless goalkeeper.

With the score at 3-1 in the dying seconds of the match, the Devils managed to find their second through a Baker half volley after the ball fell kindly in her favour. It was all too late for the Devils however as the Cobras ran the clock down to end the match 3-2. The win for the Cobras closed the gap to 5 points with the Devils and with 8 rounds yet to play in the season, there is still plenty to play for. 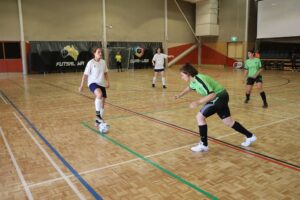 Elsewhere in the league, Perth Pumas overcame an in form Phoenix Futsal side. The Phoenix were looking to make it back to back upset wins after their previous weeks defeat of the Hawks. However, the Pumas proved to be too strong for them in the end, overwhelming them with an 8-1 victory. The win keeps the Pumas within one point of the Devils at the top of the table. Northern Hawks SC comfortably defeated Andinxs FC 4-0 in the final Women’s match of the day. Andinxs had defended well throughout the entirety of the match, but the lack of substitutes and a recognized keeper proved to be the key in the end as the Hawks opened them up with consistent movement and substitutions.